A man from Winnsboro was injured in a vehicle collision Monday afternoon when his Dodge Ram rear-ended a tractor-trailer.  The accident report states that the crash occurred a little before 1:30 p.m. on 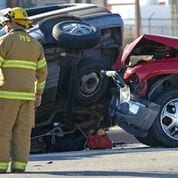 Interstate-77, near mile marker 82 in Rock Hill. The 42-year-old was wearing his seatbelt at the time of the incident, yet still suffered serious injuries. Moreover, the passengers in his vehicle suffered minor injuries, and all reported to of been wearing their seatbelts.

Apparently, the driver rear-ended the tractor-trailer that was stalled out on the highway due to mechanical issues, causing the accident under dangerous driving conditions. On that particular afternoon, there was a down pour of rainfall, which caused the roads to be slick, and therefore it was reported that it was difficult to even see the car in front of you. The man had five passengers in his truck, one being an adult female, and the other four were her minor children. They were all transported to Carolinas Medical Center in Charlotte via ambulance. The driver, however, had to be airlifted from the scene, and reports on his current condition are not yet available.

Traffic was stalled for over two hours while clean-up crews worked around the clock to make way for the current drivers. The driver of the Dodge Ram, once released from the hospital, will be charged with “driving under dangerous conditions.”  This may result in a Negligence Per Se suit. In order for negligence per se to exist, however, the following elements must be proven: (1) the defendant violated the statute; (2) the statute provides for a criminal penalty (fines and imprisonment); (3) the act caused the kind of harm the statute was designed to prevent; and, (4) the plaintiff was a member of the statute’s protected class.

If you have been injured in a serious car or tractor-trailer accident in North Carolina, contact the law offices of Reeves, Aiken, and Hightower, LLP toll-free at 877-374-5999 for a confidential consultation.  we will be pleased to assist you with whatever questions you may have.