A 64-year-old Charlotte resident was killed last weekend near U.N.C.C. after his car flipped several times, fatally injuring the man. 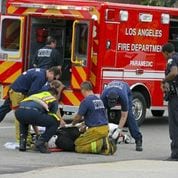 The North Carolina Department of Transportation has reported that this accident was caused by a multitude of factors; mainly alcohol and reckless driving.

The police reports state that judging by the skid marks, the car driven by the now deceased driver, was travelling almost 90 m.p.h. on W.T Harris Boulevard around 3:30 a.m. Many may not know, but the posted speed limit on the majority of W.T Harris is only 45 m.p.h., as it is not a highway.

The speed of the vehicle, combined with the impact of the grassy bank the driver collided into, propelled the car almost a whopping 150 feet from the point of take off. The car then proceeded to flip three times before landing on its hood.

The driver was not wearing a seatbelt at the time of the accident, and was thrown from the vehicle onto the pavement.

The county coroner reports that the man died from crash-related injuries, yet the exact time of death cannot be deduced. Speed and alcohol were reported factors to this terrible accident.

The passenger who was travelling with the victim was also injured, but has since been released and it is believed that he will make a full recovery.

If you have been injured in a car accident such as the aforementioned one, then contact the law offices of Reeves, Aiken, and Hightower, LLP toll-free at 877-374-5999. Mr. Reeves can assist with both the  personal injury and DWI aspects of your case.