While Four Loko is promoted as an energy drink, it is same as 4-5 beers. Confused? So are we.

Because a number of our clients were fooled, we explain previous Four Loko issues. Although marketed as a “single serving beverage,” this “energy drink” is actually equivalent to almost a six pack. In addition, they try to downplay the alcohol content in brightly colored cans. However, as part of a settlement with the Federal Trade Commission, there will be new labeling showing the truth. Hopefully, more people will now see what they are really buying. Rather than being an energy drink, a single can is enough to get you very drunk. And that is how our clients got into trouble.

Since we focus our criminal practice on DUI cases, our clients usually describe drinking beer, wine, or liquor. Consequently, “any impairing substance” is enough legally for a DWI arrest. So when we heard about an energy drink, we were skeptical at first. But we believed our clients and investigated further. The brightly colored cans are misleading by themselves, and no one knows what 12% alcohol by volume means. As a result, when we found out about the deception of Four Loko drinks, we decided to warn others. 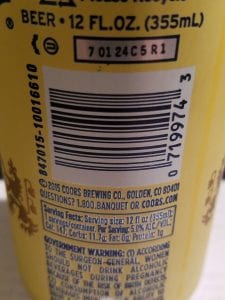 While different beers have different labels, the one to the right shows what to look for. More specifically, 12 fl. oz. contains 5.0% alcohol by volume. For beer enthusiasts, you recognize this iconic beer. But for beginners, it is original Coors. However, not all beers are the same. Rather, light beer has less alcohol, and IPA beers are more potent. And of course liquor has even higher amounts of alcohol. Because I am not a “wine person,” I will refer you to the experts. But I understand wine is about the same as IPA beer.

In conclusion, know what you are drinking and know your limits. In the alternative, drink what you like and as much as you like. But just do it at home. Better to be safe than sorry.