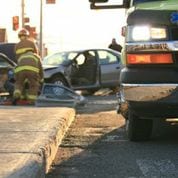 The Gaston County and Charlotte Mecklenburg Police Departments just released footage of a high speed chase resulting in the men running their SUV into a utility pole before flee on foot.

Accordingly, the North Carolina Highway Patrol began the chase in Gaston County, right on Interstate-85, near mile marker 26. The two defendants led the troopers a mile on the highway before they got off at the next exit, 27, onto U.S. 74, also known as Independence Boulevard.

This type of behavior is known as crossing counties, and makes the crime a bit more serious.

Channel 9 was alerted to the chase, and had choppers video tape and follow the suspects all the wat to the Plaza-Midwood area.

According to the Gaston County and Charlotte Mecklenburg police reports, the Gaston County police clocked two men travelling in a red SUV going 95 mph in a 65 mph area on Interstate-85. The police then flipped their blue lights on and attempted to apprehend the two men. The men led the cops on a chase all the way to Plaza Midwood, until they crashed their vehicle into another’s in a parking lot.

The men led the police to the local Harris Teeter in Plaza Midwood, where they wrecked the SUV into a utility pole in the parking lot, jumped out of the vehicle, and continued to flee via foot.The police went into the Harris Teeter searching for the men and even went so far as to search the roof for the two defendants. Thus far, the police are still looking for the driver, who out-ran the police during the chase on foot.

Moreover, Channel 9 interviewed two people who stated that they were side-swiped by the  SUV during the multi-county, high speed chase. One victim stated that ” she was pretty shaken up by the whole ordeal and stayed in her vehicle for almost half an hour afterwards because she didn’t know what going to happen next.”

Because of Channel 9’s assistance, the police were able to capture the passenger who fled on foot and have footage of him being placed in the back of the patrol car. The driver, however, is still at large.

Everyone deserves a competent defense. If you have been charged with committing a serious crime and need a serious lawyer to defend you, contact to law offices of Robert J. Reeves, P.C. toll-free at 877-374-5999 to discuss the possibilities of your representation. Also, you may visit our homepage at www.rjrlaw.com