How much alcohol does it take to get intoxicated?

How much is too much? The answer depends. 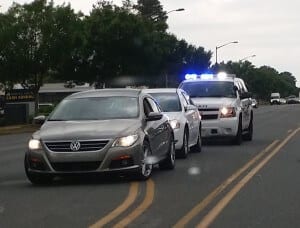 The vast majority of our clients have never been in any trouble before and often question why they are being charged with a first time DUI. They repeatedly tell us that they “felt fine” and would “never have driven” if they had any concerns about being unsafe or impaired. We believe them and question any “breath science” BAC reading. So how can you know when you have had too much to drink? The following information may help explain and even prevent DWI arrests in the future. We hope this information is helpful to our clients and readers.

Most people assume that a few beers at a ballgame over several hours or a couple of glasses of wine with dinner will not be enough to put them over the legal limit (0.08%) for driving. But how alcohol affects a person is highly individual, with a number of different physiological factors that must be considered. As we all suspected, drinking fast (shots of liquor straight) affects you more quickly and more intensely than slowly sipping any form of alcohol. Similarly, drinking after eating takes longer than drinking on an empty stomach. But contrary to myths, women and older individuals become legally intoxicated sooner than men or younger drinkers. My wife says she can drink me “under the table.” Of course, she is right. Wives are always right, but I am older now. Also, carbonated drinks (Jack and Coke) result in faster alcohol levels. Why? It is because the carbonation irritates the stomach lining which allows alcohol to absorbed more quickly. And finally, as we all assumed, other factors including fatigue, stress, and illness can result in greater impact from alcohol (drinking with a fever will get you drunk more quickly because you will also be somewhat dehydrated).

“I know when I’ve had enough”

This is a common response when someone questions if they are intoxicated. Unfortunately, such assertions are often proven wrong. And more importantly, alcohol can affect your body’s reflexes even if you think you “feel fine.” Of course, DUI defense attorneys, like me, have studied the so-called “breath science” and have serious reservations about the inherent problems with such machines (or “instruments” as the police and prosecutors prefer to call them). As experienced DWI trial lawyers, we know that BAC (blood alcohol concentration) “results” can be affected by any number of factors, including vigorous exercise, certain medical conditions (acid reflux and diabetes), and even some dieting programs. These medical conditions can increase the acetone concentration in a person’s breath that will be falsely “read” as alcohol. This will result in an artificially high false BAC level. Even some mouthwashes that contain alcohol can result in false positives and/or high readings. In response, “breath testing” machine manufacturers claim that newer breathalyzers utilizing fuel-cell technology will not result in as many false-positive readings as those made with semiconductors. However, no machine manufacturer guarantees an completely accurate result. And let us not forget that these “readings” are measured in 0.01% (one one-hundredth). So, even a small error can make a big difference in reported BAC level.

How is alcohol processed by the body?

As we discussed earlier in this article, how fast alcohol is consumed is the biggest factor as to whether a person will become intoxicated. When ingested, alcohol first goes to the stomach and then to the small intestine. It is then absorbed into the bloodstream and transported to the liver where it is metabolized (broken down) by liver enzymes. However, the liver can only process so much at a time, usually about one (1) drink per hour. Therefore, consuming one drink slowly over an hour is less likely to result in a person becoming intoxicated. Conversely, drinking more than that amount, or drinking the same amount faster, will overwhelm the liver and cause a higher BAC level. Once this occurs, only time will allow the liver to “catch up” and process the extra alcohol. The “old wives tales” of taking a hot shower, drinking coffee, or other anecdotes simply do not work. You may feel better and more alert, but your BAC level is not affected by such activities. Physiologically, the average person, man or woman, can only process approximately 0.015% alcohol per hour.

Eating can actually help to keep you less intoxicated.

Consuming food before or while drinking causes alcohol to be absorbed more slowly. That’s why drinking beer while eating wings and french fries makes you think you can now “handle” your alcohol. Why is eating better? You have a valve at the base of the stomach that closes to allow for longer digestion in your stomach before sending food along. Without this delay, the ingested alcohol travels to the small intestine and into the liver more quickly and causes your BAC to increase.

It’s not what you’re thinking. But, weight, as it turns out, does make a difference. As we all know from experience, “skinny” people cannot drink as much as the rest of us. “Healthy” drinkers can have more alcohol on board and still have a lower BAC level. So eat up America. You can drink more. And, women, because their bodies tend to have less water than a man, can drink the same amount of alcohol but will result in a higher BAC. That does not seem fair, but this is science you actually can believe. Finally, age matters also. As we get older, our livers begin to metabolize alcohol more slowly. As a result, we may feel alright, but our BAC level will be higher. We still get our AARP discounts though. For those who drink more heavily and regularly, these individuals do not get as intoxicated as a new drinker ingesting the same amount of alcohol. And, they also tend to have a lower BAC because their livers eventually begin to produce a particular enzyme (Cytochrome P450 IIE1) that can break down alcohol more efficiently.

So what is the answer?

Charlotte DWI lawyer Aaron Lee is here if you need him, but we would prefer that you not require our services. The absolutely guaranteed way to avoid getting arrested and charged with a DUI is simply to not drink before getting behind the wheel. If you have any alcohol and then get stopped for any reason, the officer is going to smell it and start the DWI investigative process. Once begun, you should plan on spending the night in jail and having to defend a DUI charge. Take a cab. Call a friend. Spend the night at a hotel downtown. Just do not drive. It is not worth the risk to you or others on the road. Just be safe and get home to your family.