Man From Greensboro Charged With DWI After Fatal Accident

A Greensboro man is being charged with a DWI after he was responsible for a fatal accident in Davidson County. 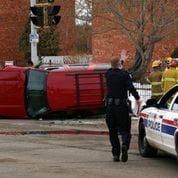 The police reports state that the accident occurred early in the morning, right around 5:00 a.m. of NC Highway 109.

Accordingly, the defendant drove his vehicle left of the center lane, hitting another driver head-on. Almost immediately after the initial crash, another vehicle travelling down the highway slammed his car into the other two vehicles, totaling all three of the cars.

Thus, what was initially a two car collision due to a drunken driver, resulted in injury and accident to all three vehicles.

Sadly, the man who was hit head-on, during the first crashed, was fatally wounded and by the time the medics arrives, he was pronounced dead on the scene.

The accident is still being investigated and other charges may still be pending, but what we do know is that the contributor to the first accident is being charged with at least a DWI.

At Reeves, Aiken, and Hightower, LLP, we defend DWIs and DUIs in Charlotte, Mecklenburg County, Pineville, Cornelius, Huntersville, Lake Norman, Pineville, Matthews, Mint Hill, and UNCC. For a private, confidential consultation with one of our experienced DWI lawyers, call 704-499-9000 or toll-free 877-374-5999 or visit our main page here at www.rjrlaw.com