A 19-year-old from North Carolina is currently facing several serious charges after he operated his vehicle while impaired; causing a serious car accident. 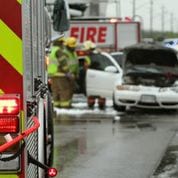 The police report state that the young defendant was driving his vehicle at approximately 11:30 a.m. while under the influence of alcohol near Fisher Ferry and Denton Road. The defendant failed to yield to the right of way, and rammed his vehicle into another’s while making and illegal left turn.

The boys failure to yield to the oncoming traffic caused his vehicle to essentially “T-bone” the victim’s car on the driver’s side.

The victim was trapped in her vehicle for almost an hour after the accident occurred. After the paramedics were able to release the victim from her car, she had to be transported to the hospital via helicopter due to the severity of the injury.

The victim was initially taken to the hospital in “serious condition,” but has since been deemed to be in critical condition. She also had her 11 month old infant in the car at the time, who luckily suffered no injuries. The baby’s car seat was properly fastened, and on the opposite side of the vehicle where the car was hit.

The young defendant was also taken to the hospital by ambulance but was considered to be in stable condition as soon as he arrived.

He has been charged with DWI, failure to yield right of way and not wearing a seatbelt, and depending on what happens to the victim, other charges may be added on at a later date.

If this is the defendant’s first DWI conviction, then his punishment will be of course less costly, and require him to spend less time in jail, if any. This would most likley fall under the Level 1 Category of DWI’s, and the defendant’s BAC level could not be .015 or higher, or he automatically receives a higher level of punishment.

The level system starts with Level 1, being the lowest punishement for a DWI, and can rise all the way to a Level 5 punishment, meaning that the defendant will be required to spend anywhere from 24-60 days in prison.

If a defendant is thereafter placed on probation, supervised or unsupervised, the judge will also require that defendant obtain a substance abuse assessment and complete any education or treatment required by G.S. 20‑17.6 as a condition for the restoration of a NC drivers license or driving privilege (for out of state resident).

Probation may be conditions on such other factors as the judge deems appropriate on the particular circumstances of a case.

Not only will the defendant have to deal with the harsh DWI laws on North Carolina, but according to North Carolina’s General Statute 20-155, the defendant will be required to pay an additonal fine of $35.00 plus court costs. N.C. Gen. Stat. 20-155(2012)

Our attorneys at Reeves, Aiken, and Hightower, LLP have experience handling DWI cases in NC and will work tirelessly to defend your case. Contact one of our attorneys directly by calling 704-499-9000 or toll free 877-374-5999. Or visit our main page here.