While everyone loves to party on this day, be careful not to get a Saint Patrick Day DUI. Because so many people are out this weekend, the police will be out in force too. So have fun but remember to be safe and get back home to what matters. 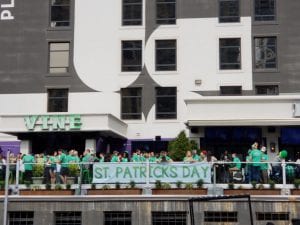 In addition to just a drinking holiday, St. Patrick’s day also has religious significance as well. More specifically, St Patrick, a patron saint of Ireland, is the reason for the season. However, as we all know, it has somehow turned into an annual major drinking weekend. While it is always a great time, it is also a great opportunity to get a Saint Patrick Day DUI. So plan ahead, be safe, and make sure you and your friends are ok before driving.

Because the police are out in force, make sure you follow the rules and stay out of trouble. For example, keep your drinking under control and avoid disorderly conduct. In addition, never take the chance of getting behind the wheel after drinking. While you can legally drive up to a BAC 0.08, any smell of alcohol starts the DWI process. And once the police start a DWI investigation, you usually end up arrested and in jail for the night. As a result, it is not worth taking the risk. So have a real designated driver, use Uber or Lyft, or stay at a hotel or friend’s house. After all, anything is better than a Saint Patrick Day DUI.

So Also Avoid Other Charges

While everyone tries to avoid a DUI arrest, there are other charges to watch out for. For example, there is always underage drinking and disorderly conduct arrests. Also, be aware that “no means no” even if drunk. So when your best mojo fails, walk away and flirt another day. Otherwise, you could face a sexual assault charge even if you go home alone. And finally, don’t argue with police. Because they are there to protect everyone, do what they tell you to do. Rather than debate or argue, just know they are doing their job to keep you safe.