Scope of Seizure During Traffic Stop

I have done a few blogs here regarding various search and seizure issues, and this week a new topic within this subject a 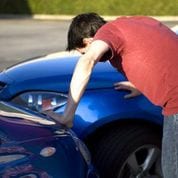 rose in North Carolina regarding drug dog “sniffs” during a traffic stop.  A new decision has been handed down this week that says holding someone during a traffic stop does not violate the 4th amendment so long as the detention is “de minimis.”  So now the legal question that arises is when does a detention exceed the de minimis scope?

In the opinion of State v. Sellars which was decided on August 7, 2012, the court held that detaining an individual for four minutes and thirty seven seconds beyond the scope of the original traffic stop was de minimis and therefore did not violate the 4th amendment.

The facts of the case are that two police officers from the Winston-Salem Police Department stopped a vehicle that weaved twice out of his lane.  Upon approaching the vehicle and speaking with the defendant the officer determined the driver was not intoxicated.  While speaking with the driver he appeared nervous.

The argument that was made on the defendant’s behalf was that the traffic stop was finished after issuing the warning ticket and returning his driver’s license, and that was not reasonable suspicion to justify extending the traffic stop.   The State counter argued that even if police did not have reasonable suspicion the extended detention was de minimis and thus did not violate the defendant’s 4th amendment rights.  The State ultimately won its argument on the grounds that the detention of four minutes and thirty seconds was de minimis and thus the 4th amendment was not violated.

After this decision we now know that the court will allow police to detain someone past the scope of the original traffic stop to allow a dog to sniff the vehicle, but the question remains as to where is the cutoff point?  Four minutes and thirty seven seconds is acceptable now but is five minutes too much?  The opinion does not give us any further guidance as to what the cutoff point might be.  This legal question is sure to play out in North Carolina courts in the future and at this point all we can do is wait for clarification.

The  attorneys at Robert J. Reeves, P.C., will review your case and make sure you receive the fair representation you deserve. If you find yourself in a situation in which you have been charged with a crime in North Carolina you need to hire an attorney who knows and understands complex criminal law. Contact one of our attorneys directly by calling 704-499-9000 or toll free 877-374-5999.