Two People Charged with DWI from One vehicle: Aiding and Abetting 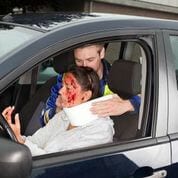 A vehicle accident which occurred in Gaston NC will result in two charges related to impaired driving. Normally one would think that the drivers of two separate vehicles are receiving the charges. However this case is not an ordinary case, as both the people being charged were in the same vehicle. The driver of the vehicle that was involved in the accident and the passenger of the vehicle will be receiving charges related to impaired driving.

The statute specially states that  a” defendant aids and abets impaired driving when he knowingly advises, instigates, encourages, or aids another person to drive while impaired and his actions cause or contribute to the commission of the crime. State v. Goode, 350 N.C. 247, 260 (1999).

This charge has become increasingly more common in the state of North Carolina.

If you have been charged with a DWI or an “aiding and abetting” charge in North Carolina, it is important to contact an attorney who understands the law. Our attorneys at Robert J. Reeves, P.C. have experience handling criminal cases in NC and will work tirelessly to defend your case.  Contact one of our attorneys today directly by calling 704-499-9000 or toll free 877-374-5999 or you can visit our main page at www.rjrlaw.com for more information.