Woman With Children In Vehicle Charged with DWI 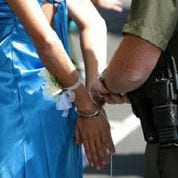 A woman was arrested for DWI after being involved in an accident with her four children in the vehicle. The accident occurred in Cape Carteret on N.C. 24.  Police believe the woman overcorrected her vehicle after driving left of center, which caused it to flip several times.

The four children in the vehicle were all under the age of 5 and all of them were injured. Two of the children were critically injured as well as a passenger that was in the vehicle. The driver was not seriously injured.

The woman was charged with DWI and two counts of felony serious injury by motor vehicle.  She has not yet gone to trial on the charges but was released on bond. Part of the condition of release for her bond was that she had to be under electronic monitoring. While she was out on bond she was arrested for shoplifting at Wal-Mart.  As a result her bond as now been increased.

What Does the Law Say?

In the state of North Carolina if you are charged with a DWI, and also have a occupant in the vehicle at that time that is under the age of 16, you may also receive an additional charge of DWI Child Endangerment. The penalties for this charge may vary, depending on how young the child is, what your Blood Alcohol Level (BAC) level is, and if you have ever been previously convicted of a DWI.

The minimum penalties include seven days up to a year in jail, up to $2000 in fines, and revocation of your driver’s license for at least 30 days.

Moreover, the maximum penalty becomes much harsher in the event you were involved in an accident, or have a previous conviction for DWI. At this level you may be facing up to two years in jail, a fine of $4000, and having your driver’s license suspended for a lengthy period of time.

In the case at hand, it is safe to assume that the defendant will be subsequently charged with Child Endangerment as well, due to the injuries and ages of her children, in conjunction with her BAC level.

If you find yourself in the aformentioned situation, you need to contact a criminal defense attorney in the state of North Carolina as soon as possible. At Robert J. Reeves, P.C., we are experienced in handling criminal cases in NC and will work tirelessly to defend your case.  You may contact one of our attorneys directly by calling 704-499-9000  or toll free 877-374-5999 for more information. You may also want to visit our home site at www.rjrlaw.com