Most negligence cases in the state of North Carolina are brought before the Superior Court, and a Superior Court judge will decide whether the case should go before the jury.  When the losing party disagrees with the 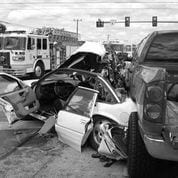 decision, it may be brought before the North Carolina Appellate Court.

The reality in North Carolina is that with regard to negligence, a plaintiff must adhere to the arduous standard of contributory negligence, meaning that if you contribute “in any way” to the negligence involved in a situation, you will be barred from recovery. So, in other words, if a person is 0.01% at fault, as opposed to other states who adhere to a 50 or 51% standard for comparative and modified comparative fault, you will recover nothing.

An example of this ridiculously harsh standard is a 2011 case, where a driver was sitting at a stop sign and “texting” on his cell phone.  While he was distracted by his Android or iPhone, he edged his car directly into the path of a woman traveling through the intersection.  There was no time for the woman to react, and a collision took place.

When speaking with police at the local hospital, an officer inquired as to how fast the woman was going; she replied that she believed it was “about 50 m.p.h.”  This was, however, problematic due to the fact that the speed limit was 45 m.p.h., however the woman was not charged with speeding (so no negligence per se on her part). The officer did, however, wrote this information in his report.

The driver, who was texting, was cited for failing to yield.  Therefore, as a result of the report, the insurance company denied the woman’s claims for property damage, medical bills, lost wages, and pain and suffering.  She was denied ALL of her alleged damages.

This is where it was mandatory that she hire an attorney, and ultimately the jury found the defendant contributory negligent (at the most minimum level), due to the speed limit, and recovery was further barred.  The attorney appealed to no avail, and the injured woman received NO payment for ANY damages.

This may seem hard to believe to the un-knowing North Carolina driver, that a simple statement by a woman that she was going five miles over the speed limit, with no citation filed, allowed a jury enough proof to find that she was also negligent.  Nothing was recovered by the woman, and she will be left to pay for all of the damages on her own.

Just south of the North Carolina border, in South Carolina, the standard is modified comparative fault, where if a plaintiff is found to be less than 51% negligent, she will recover.  Therefore, this woman would have received a percentage of her damages based on fault, which in this case, she would likely receive 95% of her damages.

The key to avoiding this archaic law in North Carolina, of course, is to stay safe on the roads and avoid breaking any traffic laws. However, even if you are an extremely careful driver, you are still subject to accidents, and plowing through the minutiae of detail, a shrewd personal injury defense attorney can easily find something that the plaintiff did wrong.

Therefore, if you or a loved one has been involved in an accident in North Carolina, it is important to have an attorney who is willing to work tirelessly for your claim.  Call Robert J. Reeves, PC at our Charlotte, North Carolina office at 704-499-9000 for a confidential consultation as to the negligence law in North Carolina.