While alcohol DUI arrests may be down, prescription drug DUI cases are on the rise. After all, doctors prescribe more medications here than anywhere else in the world. 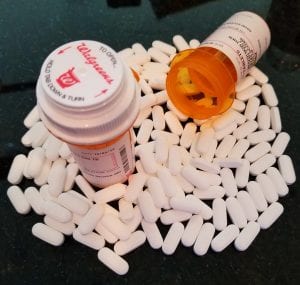 So What is Prescription Drug DUI?

Because most folks think of alcohol related DUI arrests, prescription drug DUI cases are currently under the radar. In addition, current field sobriety tests don’t test for drug based impairment. Furthermore, there is no “legal limit” like the 0.08 BAC for alcohol. Rather, urine tests only show the presence of a medication. As a result, it is actually harder for police to prove you guilty in a drug case.

While marijuana and other illegal drugs are easy, you can get a DUI if taking doctor prescribed medications. So is that possible? After all, you are only following doctor’s orders – right? Regardless of the reason, the law says “any impairing substance” will do. As a result, no matter what the medication or the reason for taking, an arrest is still possible. However, without bad driving, many jurors will identify with you because many of them also take prescribed drugs.

However, Some Drugs are DUI Per Se

As you might expect, any amount of certain illegal drugs make for a DUI period. In addition, under these laws, the State does not have to prove bad driving. Rather, just the presence of these “street drugs” is enough to convict. For example, if you have any amount of cocaine or heroin in your system, you are guilty under law. However, we can still challenge the test results for improper sample collection or testing. So don’t give up just because the blood work came back positive for an illegal substance. After all, we have different defenses available depending on the particular circumstances of your case. Furthermore, although every case is different, we know you are counting on us to do everything we can. And that’s just what we will do because we made you a promise to give it our best.

So call now and let’s start your defense today.